Simone opened the door to our Airbnb, her hair wet from the shower, and a lose dress. “Of course she already looks like she lives here,” I thought. She had arrived a few hours before us. Sarah, Kristen, and I flew together, coincidentally sitting next to each other. These three girls are my Girl Power Team while living in Madrid. This trip was overdue.

We decided to travel together during a late lunch at De Patata Madre in Bilbao, Madrid. Kristen and Sarah had spontaneously bought cheap flight tickets with a sketchy sounding airline: Wizzair. Simone and I spontaneously decided to join, though this city was not high on my wish list. Kristen and Sarah teach English at an elementary school, like me. Simone teaches in a high school. “Welcomeeee!” Simone said, smile on her face. “Wait until you see the view.” “We have a view?” Kristen asked. Our Airbnb was a street over from the famous Parliament building, and our bedroom had massive windows overlooking the Danube river. “Now…you don’t say Budapest,” Daniel, our taxi driver had said. “It’s really pronounced Budapesht.” First mind blown. We hardly knew anything about Hungary, let alone Budapest. They were originally two separate cities divided by the river. The west side was Buda, and the east side was Pest. The drive along the Danube river from the airport to our Airbnb left us breathless. “Wow,” we said. Daniel recommended a few places. He loves his city, and has lived there all his life. “I can’t imagine living anywhere else in the world. Two weeks away from home, and I miss it so much.” I, on the other hand, can’t imagine living in one place forever. I didn’t judge his choice. “Not all of us have the same dream,” I thought.

My first impression of Budapest was ENCHANTMENT. I was in an enchanted city. I expected to see Cinderella. I pictured her carriage, her dress, her fairy god mother. They would have fit right in with this city. All I could see were castle buildings and bridges lit up with the most flattering golden light.

The next morning we did a tour of the Parliament. Its construction began in 1885, and completed 19 years later. I had seen a couple of pictures of it, but they did not do it justice. This is the most astonishing building I have ever seen. In terms of architecture, I have never felt more like I was in a princess’ palace. The student ticket was around 4€. Hungary has its own currency (the Forint), and we had to constantly convert the prices in our heads to euros, to make sure we were not going over our budget. We found all the Budapest sight seeing to be remarkably cheap, and the food (even the fancy places) to be fairly priced.

After the Parliament tour, we walked along the Danube river (the second longest river in Europe, and the longest river in the European Union region). There is a shoe memorial near the Parliament, which has heartbreaking history. During WWII, the Jews were lined up along the river, undressed, and shot. Their bodies would then fall to the river, and washed away. Here we were, not many decades later…4 American tourists, walking along without a care in the world, soaking the view, and taking pictures that would be shared on Facebook. 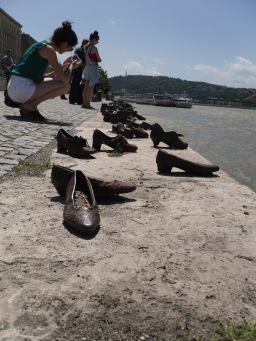 We headed to the St. Stephen’s Basilica, which is on the Pest side of the city (like the Parliament). The ticket was around 2€. The inside of the Basilica is beautiful, but I was most impressed with the view when you go up to the dome. You pay a  fee to go inside, and another fee to go up to see the view. If you are on a very tight budget, I would recommend the dome view. Once up, you can see everything. 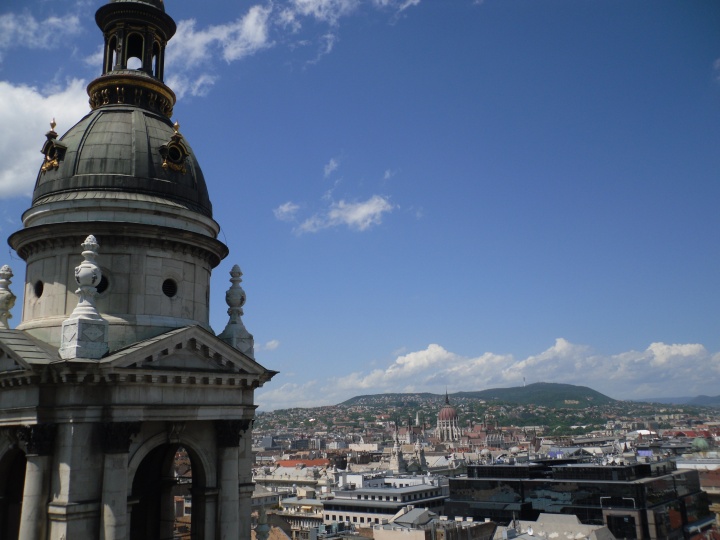 After a little coffee break, we walked across the iconic Chain Bridge to the Buda side. This part of the city is more residential, and rich. We spent some time at the Fisherman’s Bastion, Matthias Church, and Buda Castle. We did not go inside any of these, but the stunning views were enough to keep us in wonder. We did an intense amount of walking under the sun, and stuffed ourselves with Hungarian beef stew for dinner. 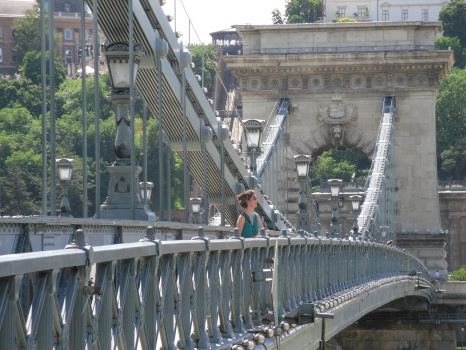 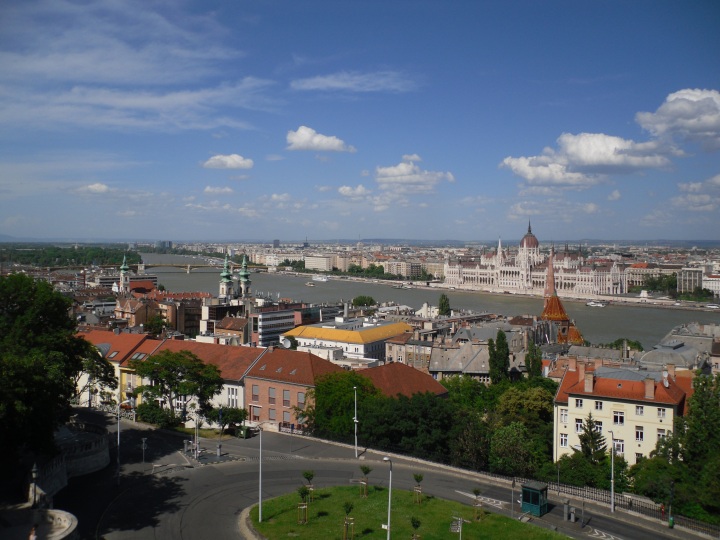 In the evening, we grabbed bottles of Hungarian sparkling wine, and sat by the river, near the Chain Bridge.

We sat there, watching the sky change colors. Watching the darkness, and watching the lights come on. It was a most beautiful time. I would not have had it any other way. Not just the city, but the three friends I shared it with. It was not just the beautiful background, and laughter, but our whole being. Our being together, regardless of what we were doing. Looking back, it did not feel like there were 4 of us, but 1. Simone cried and laughed as she made a toast. We talked a lot, but we were quiet a lot, too. We belong together. It doesn’t matter where, Spain, Hungary, or the United States. We belong together in the same place.

There was an error retrieving images from Instagram. An attempt will be remade in a few minutes.