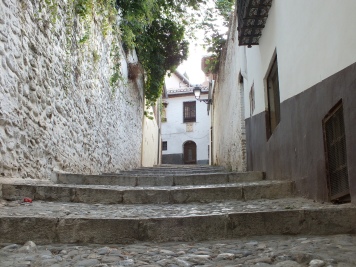 No, but seriously. I was really, really, really glad I wore my hiking boots. Granada is the steepest city I have yet been to. It was my first trip to the South, a long time wish while in Spain. The main thing drawing me to this region was Flamenco dancing. Granada is known for housing  THE most symbolic touristic sight, representative of Spain: La Alhambra. This was a small city that housed around one thousand residents in Moorish Spain – a period that lasted about 7 centuries, starting in the 700’s.

When we think of Spain’s stereotype, we often picture bullfights, Flamenco dancers, ham, and sangria. What may come as a surprise to many is that Spain was heavily influenced by Islam as much as by Christianity. A trip to Granada opened my eyes to the 7 centuries of Moorish history in Spain, and induced new interest in Arab culture.

The highly detailed architecture, the colorful designs on everything from mugs to purses, plus a wide variety of healing teas and colorful spices was enough to remind me how little I know the world, and how stereotypes and negative media can kill a culture’s beauty. In order to fully appreciate Granada, I do recommend doing some reading on its history, preferably while you are there. The city itself is beautiful, but looking at things knowing what they were, and how they came to be, upgraded my experience.

Personally, I am a big Rick Steves’ fan. He does a great self-guided, walking tour of Granada, which my friend and I followed in a span of two hours. You can find loads of information online, and travel blogs. Whatever source of information you choose, make sure you don’t miss out on the significance of the sites you are seeing in order to enhance the emotional depth of your visit. Though there is much to see in Granada, I will share with you my three top experiences in this place, in the hopes to condense a getaway of marvel and cultural appreciation:

1.La Alhambra: whatever you do, buy your ticket in advance. This is no joke. I am all for budget travel, and often skip out paying for touristic sites just to explore the free sidewalks of a city. However, missing out on The Alhambra while in Granada is probably missing out on at least half of why you should go to Granada in the first place. Luckily, my friend and I went there before the sunrise, and got tickets for the same day. This place sells out far in advance – don’t risk it like we did.

The Generalife gardens are full of life and tranquility, depicting Heaven as described in the Quran, and sending you back in time.“Water – so rare and precious in most of the Islamic world – was the purest symbol of life to the Moors. The Alhambra is decorated with water: standing still, cascading, masking secret conversations, and drip-dropping playfully” (Rick Steves, SPAIN 2015). The Palacios Nazaries are just out of Disney’s Aladdin. These two sites are the ones you pay for. The rest of the Alhambra is free, and still beautiful.

But The Generalife and the Palacios Nazaries are the two things you really want to see. If you can, get a tour guide, as you will not have written explanations of what each room was for. Again, I did the Rick Steves’ SPAIN 2015 self-guided, free, walking tour, and it was everything I needed to know things like: the ceiling in the Sultan’s room represents “the complexity of Allah’s infinite Universe,” or the phrase “only Allah is victorious” is written throughout the Palace…9,000 times.

2. Flamenco: I have always loved Flamenco. Though Sevilla is widely recognized as Flamenco’s “birthplace”, you can get an authentic Flamenco show anywhere in Andalucía (Spain’s South where famous cities Granada, Sevilla, and Cordoba are). At first we debated spending money on a dinner show. But it was worth every second of my time.  The level of passion, and emotion in Flamenco is contagious to all involved: guitarist, singer, dancer, spectator. Feed off of them, and let them feed off of you. Let the singer’s saeta move you the way it’s meant to. We went to Jardines de Zoraya where we paid 18€ for a memorable show, plus our Sangria and a shared plate of huevos rotos (not included). A pricey evening, but honestly, if you can afford to indulge in highly cultural experiences, just do it.

3. The Cathedral: located in the city center, it is not only beautiful, but powerful. We did not go inside because it was closed. However, just from the outside, we could feel its triumphant energy. Understanding the historical aspect made the cathedral fall into my top 3 sites in Granada.

Started in the 1500’s and not finished until the 1700’s, the Christian conquerors decided to build the Cathedral on this spot, where the Mosque had been demolished. There was better soil to build a stronger foundation for the Cathedral, right outside the city center, but that was a big No-No if they wanted to make a statement. However, in order to appeal to Muslims who had to convert, they declared “Ave Maria” on the façade because Mary is “revered in the Quran” (Rick Steves, SPAIN 2015).

Reflecting on the back and forth wars, which often involve religion, it was a powerful experience.

After learning the history of this Cathedral, I read about Cordoba’s famous Mosque. It seems its doors and bells were part of the demolished Cathedral in Santiago de Compostela, and were carried to Cordoba by Christians. So now visiting the famous mosque in Cordoba is high on my Spain list.

Attempting to look at the bigger picture of a vast amount of history, it is impossible to deny that we have all hurt each other time and time again. It brought some sadness thinking that perhaps very little has changed. I know I am touching a hot topic now, but this is what travelling does. Once you get through the multiple obstacles of spontaneous travel, and all the self-discovery, you start to see the world, its people, what was, and what could be.

So my friend and I left Granada, nearly missing our bus. What is it with transportation and time that I always end a trip running? I was running in the streets to get a taxi after a day walking the steep hills of Granada, and I was really, really glad I wore my hiking boots.

2 thoughts on “I was really, really glad I wore my hiking boots.”